Our mission team in Salinas, Ecuador, just got started in June, but they are already making an impact there. They began by going to different neighborhoods to meet people on the street, talk with them about God, and invite them to attend worship.

The team also found an inspired way to build relationships quickly; they started a soccer school and 20 children have already enrolled! Kevin Canelón, an experienced soccer player, runs the training. The school meets three times per week.  After the soccer drills, Kevin prays with the students and then Alex Rivas shares a Bible lesson. The cost for the school is just $1 per month, which pays for refreshments for the kids. 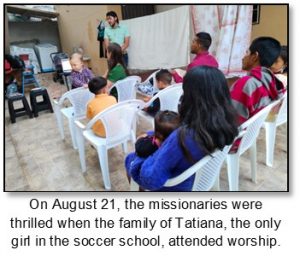 This work with children is opening doors for the team… literally! After soccer training, some of the kids have asked the missionaries into their homes to meet their parents, and they have been able to study the Bible with some of parents. The missionaries have also started studying with the family of one of Nathaniel Canelón’s preschool classmates.

The new church currently meets in a small courtyard in the apartment building where the two families live. (See picture at right.)

Jonathan Hanegan travelled to Ecuador this month and spent three days with the team. He reported that after soccer school one day, the missionaries went to the home of one of the boys and had a time of singing and Bible study. Jonathan was pleased to see the kids and parents so receptive. He said the kids love participating in the school and need a lot of positive affirmation since many of their parents work very long hours. One boy told Yurubi Canelón (Kevin’s wife) she was like a mom to him!

The team is planning to conduct an evangelistic campaign this fall at a Bible-themed recreation park that can hold hundreds of people. Northside’s Safari, Loft, and youth group classes have been challenged to contribute money to help the mission team pay for this event.

If you’re a Facebook user, ask to join the private group, Misión Salinas, where the team posts frequent updates. And please continue to pray for the Canelón and Rivas families as they work hard to spread the gospel in Ecuador.