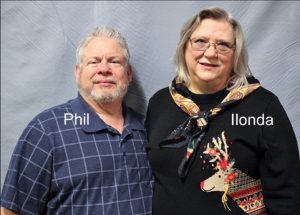 Phil & Ilonda Griffee will celebrate their 20th anniversary this coming June. He has two sons from a previous marriage and she has five children. Two of their seven children live in the Wichita area. They also have nine grandchildren (eight living). Phil was born in Maysville and raised in Manhattan. After high school he spent four years in the Marines and then moved to Topeka and earned an associate’s degree in electronics. In 1984 he moved to Wichita and has worked in avionics for Collins Aerospace for the past 32 years. Ilonda was born in Sublette and raised in Penalosa on a dairy and wheat farm. She attended Kingman High School, but didn’t graduate. Later, she took the GED and was told she had gotten the highest score ever at that time in the state of Kansas. She then earned an associate’s degree from Pratt Community College and a bachelor’s degree from Taber College in the science of  nursing. Later she earned a master’s degree in nursing from WSU. Ilonda has worked as a nurse practitioner at McConnell Air Force Base for eight years. She started in family practice, but now her job is to assess the health of active duty Air Force members. Ilonda says she has worked in some role as a nurse since she was 15! She is a member of the Daughters of the American Revolution and enjoys   genealogy research. She likes knitting and wants to learn to quilt. Ilonda is also learning to play the piano and guitar. At their previous congregation, Phil volunteered with the security ministry and Ilonda served on the medical team. She says a special ministry she enjoys is helping people understand what their doctors are telling them. 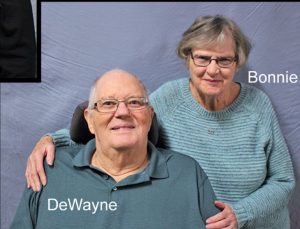 DeWayne & Bonnie ONeal have been married for 54 years. They have three daughters who live in the Wichita area, ten grandkids, and three great-grandchildren. DeWayne was born in Strong City and raised north of Emporia on a farm near Allen. After high school he went to trade school and learned to be a mechanic. In 1965 DeWayne was drafted into the Army and served two years in Okinawa. When he returned to civilian life, he worked as an auto mechanic for 50 years, first for Dulohery and then for Peniston. DeWayne used to enjoy playing golf, but 50 years of mechanic work was hard on his back, and over the past five years he has endured six back surgeries. He is now living with an incomplete spinal cord injury and is unable to walk. For the first half of 2021, DeWayne was also fighting sepsis and was confined to the Winfield Veterans Home. Despite his challenges, DeWayne is a people person and enjoys a good joke. He also likes to build model cars. Bonnie was born in Sabetha and lived there until 8th grade. Her family then moved to Clay Center until 1960 and then on to St. George, where she graduated from high school in 1962. She attended Manhattan Christian College for 2 1/2 years and then worked with the VISTA program in Maryland for almost a year. She then moved to Emporia to work in a hospital, and that’s where she met DeWayne. Over the years, Bonnie has had lots of jobs. She worked at the Kansas State Library, various nursing homes, and then at the Riverside Hospital for 16 years. Her last job was for Dr. Jay Stanley Jones scheduling patients for orthopedic surgeries. She retired in 2010. Bonnie enjoys reading and going to painting classes. At their previous church, she co-taught the kindergarten and first grade class for 40 years.