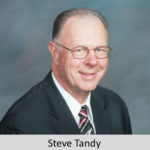 You may not know the significance of the date July 13, 1986, so let me tell you. That is the Sunday Know Your Bible debuted 36 years ago. A little group of Christians (about 250) met that Sunday at 2105 N. Jackson in Wichita to watch the first broadcast of their new TV ministry. They had been challenged by their elders (Claude Brazell, Marvin Casebolt, Hoyt Mauck, and Wayne Williams) to contribute $30,000 to pay for the program for the remainder of 1986, and a collection was taken before viewing the first program. When the gifts were counted, the total was $51,725. (Bear in mind that the weekly contribution back then was a little over $3,000. A one-time contribution of the same ratio today would be well over $300,000.) That  sacrificial outpouring started an amazing ministry.

Initially, KYB covered about two-thirds of Kansas and reached over the border a little ways into Oklahoma, Colorado, and Nebraska.  In the late 90s, a Northside member gave a couple of extraordinary gifts to KYB and we were able to expand into the Springfield, Missouri, market, reaching parts of Missouri and Arkansas. In 2001, the Burlington, Iowa, congregation made a sacrificial commitment to help us cover their area by going on the air in Rock Island, Illinois.  Then in 2011 we began broadcasting in Sioux Falls, South Dakota, and reaching in to Minnesota as well. That’s 10 states that are now receiving 30 minutes of Bible teaching each Sunday.

There are still some Northsiders who remember the excitement of KYB’s beginning. The first phone calls, first Bible Correspondence Course students, and first visitors were all big events. It’s even more exciting to know that it is still happening, only multiplied manyfold.

Today, Northside is different in many ways. We’ve tripled in number, built a new facility, expanded it once, and started many new ministries. I believe many of those blessings are the result of what happened on July 13, 1986. God rewards faith, and starting a TV  ministry in the fashion we did was a significant leap of faith. I also believe we have been blessed because of how Know Your Bible is about kingdom-building instead of just Northside-building.

Certainly, we have many members who were converted through KYB or chose Northside because of the program, but KYB is much, much more than a local program. We intended from the start to “contribute to the growth of every congregation in the viewing area,” and we get constant reports that we are accomplishing that.

It’s hard to believe that 36 years have gone by. Over 1750 broadcasts later, it is still an amazing ministry.