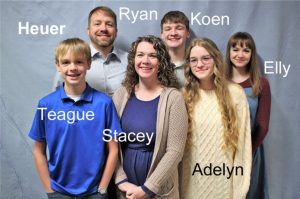 Ryan & Stacey Heuer were born and raised in Illinois. They met as students at Blackburn College, where they graduated in 1999. Ryan majored in chemistry and business, and Stacey in elementary education. They were married in 2000. She taught 7th grade reading for a couple of years, but has mostly focused her time on raising their four  children. In addition to Illinois, the Heuers have lived in North Carolina, Iowa, and as of 2007, in Kansas. Ryan works in biotech sales for Phibro Animal Health. Elly (21) is the oldest of the Heuers’ children. She is in her final year of graduate school at WSU studying speech and language pathology. She is an accomplished cellist and has played in the Delano Chamber Orchestra. Adelyn (19) is also at WSU, studying industrial engineering. She has sung in choirs, but is currently working hard to finish her honors degree in three years. Koen (16) is a sophomore at Maize High School and participates in choir, track, robotics, Chemistry Club, and Scholar Bowl. Teague (14) is in 8th grade at Maize and is in cross country, track, Scholar Bowl, and Science Olympiad. The guys also run a mowing business together. 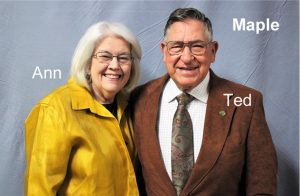 Ted & Ann Maple moved to this area from Ulysses last year and now live at Silver Maple Camp, which was started by his family. He was raised on a farm south of Kingman and she grew up in the small towns of Waldo and Waldron, Arkansas. They both graduated from Harding College in 1964. His degree was in biology and hers in elementary education. Ted graduated from UMKC dental school in 1968. He taught prosthetics for two years and then moved to Ulysses, where he had a dental practice for 50+ years. Ted also served as an elder at the church there for 27 years. He used to fly for business and has logged 3,000 hours. Ted has two grown children and eight grandkids (six living). His first wife, Paula, passed away in 2012. Ann taught school for 23 years and earned a master’s degree from Louisiana Tech at the age of 52. She was voted Teacher of the Year in El Dorado, AR, and was the first white teacher at a black school in Little Rock. She has three sons and six grandchildren. Ann started a “Sewing for the Master” ministry 12 years ago (now active at SMC) and has sent clothes to Haiti, Zambia, Guatemala, Tanzania, and the Philippines. He first husband, Norman Preston, died in 2012. Ted and Ann sang together in the Harding A Cappella Choir and after their first spouses died, they reconnected and were married in 2014. Ted has a couple of cousins who are Northside members: Lois Ann O’Neal is his first cousin and Cliff Cross is his second cousin. 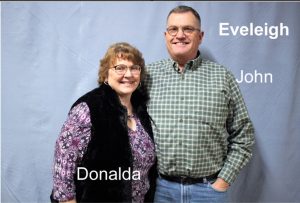 John & Donalda Eveleigh moved to Wichita from Kingston, OK, in 2020. Just before they moved they had a house fire and lost everything. (They jokingly told me that if you have to move, that’s the way to do it!) John was raised in Lakin and Donalda in Hugoton in western Kansas. They were married after her junior year of high school. The Eveleighs have two grown children and three grandkids. John served as the deacon over worship leading in Ulysses. He farmed for 10 years and has also worked for construction and gas companies. John currently works as a truck driver for Mies & Sons hauling cream and milk. He enjoys showing and racing his Dodge Challenger Super Stock car. Donalda has worked as a para and a Mother’s Day Out teacher and worked 17 years for Pioneer Communications in Ulysses. She currently works as a safety administrative assistant for Dondlinger Construction. John & Donalda both enjoy singing and she also likes gardening.