Janell Carr was born and raised in Great Bend. She graduated from Fort Hays State University with a degree in elementary education in 2009 and moved to Wichita in 2010. Janell has been a special education teacher for 13 years. She works with kindergarten through third grade students at McLean Science and Technology Magnet Elementary School. Her daughter, Zaylee (10), is in fourth grade at McLean. Zaylee is in her second year on a competitive dance team and enjoys lyrical, hip hop, contemporary, and tap dancing. She also likes to swim and ride horses and is taking riding lessons at the Wichita Riding Academy. 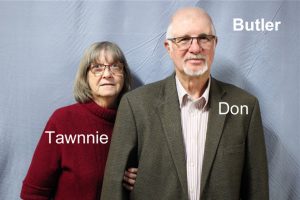 Don & Tawnnie Butler met when they were students at Oklahoma Christian College and were married in 1967. Don was born and raised in Wichita and Tawnnie’s dad served as a civil service fire chief on military bases, so she grew up all over. He was last stationed in Southern California. Don transferred to Wichita State to finish his bachelor’s degree in engineering and also earned a master’s in industrial education and technology there. He taught at Maize High School for 42 years and was the head of the Industrial Arts Department, qualified to teach 22 classes. In one of his classes Don taught from a book he wrote called “Small Engine Repair.” Tawnnie worked for 42 years as a secretary and is also now retired. For 35 years the Butlers also ran a lawn service and employed their three children as well as many other high school students. The Butlers have three grown children. One daughter lives in Mulvane, one in Wichita, and their son lives in Missouri. Their children have blessed Don & Tawnnie with nine grandchildren, ranging in age from 6th grade to a sophomore at Harding University. Don likes to hunt, fish, go kayaking, work out at the Northwest YMCA, and build things in his shop. Tawnnie enjoys going to her grandkids’ events. 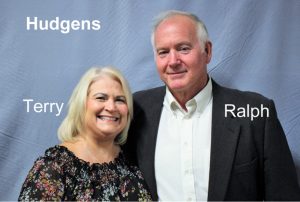 Ralph & Terry Hudgens are empty-nesters and moved to Wichita eight years ago from Farmington, AR, to be closer to Terry’s  parents. Ralph grew up in Edinburg, TX, and earned an associates’ degree in electronics from Texas State Technical College in Harlingen. In 1987 he moved to northwest Arkansas where he worked in manufacturing. In 1997 he earned a bachelor’s degree from the University of Arkansas in industrial engineering. Terry grew up in Wichita and graduated from South High School in 1975. After living in California and Texas, Terry and her family moved to Fayetteville and she worked 10 years as a title agent. The Hudgens were married in 2004 after Terry’s daughter-in-law introduced them. They have four grown sons. Terry graduated in 2013 from U of A with a degree in nursing and worked for seven years for the VA hospice, but since 2021 she has been a nursing instructor for LPNs at WSU Tech. Ralph is also an instructor there, and he teaches industrial automation. Terry enjoys gardening, home projects, and cooking. Ralph’s  hobbies including maintaining their pool and working on the family cars. Terry’s mother passed away last year, but her 86-year-old dad is still very active and continues to play handball at the YMCA. In fact, in his younger years he was the Wichita city champion in that sport. He’s still champion in his age bracket, but these days he doesn’t have much competition.