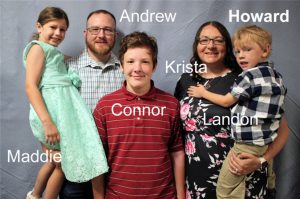 Andrew & Krista Howard have returned to Northside after living in Gretna, Nebraska, for four years. They had originally moved to Wichita from Denver in 2007. The Howards met at Glacier View Christian Camp as teens and were married in 2006. Andrew is a superintendent for Greenway Electric and has been with them for 13 years. Krista graduated from Newman University in 2017 with a degree in respiratory care and has worked for four years in home health and hospitals as a respiratory therapist. Andrew enjoys riding dirt bikes and watching sprint car racing. He also likes running and is training for his first half marathon this fall with Tristan Block and Matt Gardner. Krista enjoys baking and reading historical fiction. The Howards have three children. Connor (13) will be in 8th grade at Goddard Middle School. He likes to ride four-wheelers and play Nintendo. He has enjoyed getting involved with the youth group and participated in Wichita WorkCamp. Maddie (8) will be in 2nd grade at Amelia Earhart Elementary. She likes riding her bike, swimming, playing with the dog, and rock climbing. Landon (almost 6) will be in kindergarten. He enjoys riding dirt bikes and doing mechanical stuff with Dad and making everyone laugh. 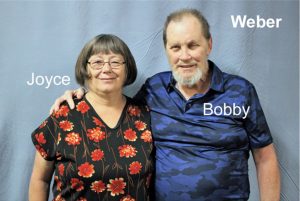 Bobby & Joyce Weber are also former members and were part of the Northside Family from 1988 to 2002. Bobby grew up in    Keystone, WV, and is the brother of Northside members Tony Weber, Frannie Nash, and Heather Wheeler. He attended vo-tech schools to study welding, truck driving, and electrical work. Bobby worked at Boeing for 20 years until he was laid off, then the couple moved to Attica where he worked as a truck driver for 20 years. He lost the sight in his left eye three years ago as a complication of diabetes and only has 20% vision in his right eye. He is also a prostate cancer survivor. Joyce grew up in Wichita and attended South High School. She is the youngest and only surviving member of six siblings in her family. When she was younger, Joyce delivered glasses for her dad, who was an optician. She later worked for 30 years as a computer operator for Tupperware, the Weber family business. In Attica, Joyce worked for the Attica School System, Pratt Community College, and Attica Care Home. The Webers met as teens “dragging Douglas” and were married in 1972. They have three children, one of whom is Northside member, Mindy Eck, and they have eight grandchildren. Bobby and used to enjoy racing cars. Now he likes watching Law & Order. Joyce enjoys reading mystery novels, doing counted cross stitching, and playing games with the grandchildren. 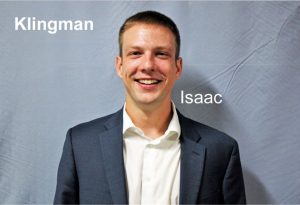 Isaac Klingman was born and raised in Wooster, OH, and grew up on the family farm. He graduated from The Ohio State University in 2020 with a degree in agribusiness and applied economics. Isaac moved to Wichita in May 2021 and works for McCurdy Real Estate and Auction as an auctioneer and real estate agent. He manages about 20 auctions at any given time all over the state of Kansas with an emphasis on farms and ranches, so Isaac leads a very busy life. He is active in Northside’s college-age group (ICT Campus Ministries). Isaac also enjoys travelling and is a history buff.