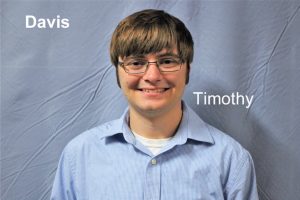 Timothy Davis was born and raised in Missouri, mostly in Saint Louis, and moved to Wichita with his family in 2020. Timothy started his college studies at St. Charles Community College and graduated from WSU this past May with a degree in finance. While at WSU, he worked as an intern for Textron Aviation, and as of August 15 he works full time as an accountant for Textron Aviation Defense. Timothy is an active member of Northside’s college-age group and participates in the Bible studies they have at different homes on Sunday afternoons. He also enjoys reading novels and non-fiction, especially history. 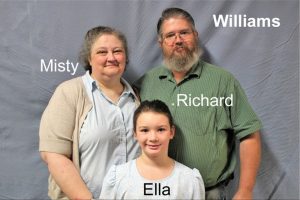 Richard & Misty Williams moved to the Wichita area in June from Ogden, Utah. Misty is the aunt of Northside member, Elizabeth Bruce. Richard grew up in Missoula, MT, in a family with a long line of preachers in the Church of God. He served as a mechanic in the Army for 13 years and was stationed in Iraq for a year. He also worked as a civilian contractor in Bosnia and Kuwait for a year. While serving, he suffered an undiagnosed brain injury and left the Army in 2005. In 2007, after experiencing a brain hemorrhage, he was authorized to receive disabled veteran benefits and retired. Before his disability, Richard used to perform as a stage magician. He also enjoys woodworking, welding, and inventing things. Misty was born and raised in the Upper Peninsula of Michigan in the town of Hancock as a preacher’s kid. She’s a direct-entry midwife, specializing in prenatal and newborn care, labor & delivery, postpartum care, and childbirth education. Misty is also an herbalist. Last year she published a Christian coming of age novel titled “Sweet & Easy” with help from Richard. She enjoys making lace, knitting, crocheting, and sewing. Between them, Richard & Misty have 10 children, the youngest of whom, Ella, is still with them. Ella (9) is in 4th grade and has done ballet, tap, and jazz dancing for four years. She also enjoys reading and is learning about horses. Richard & Misty have dreamed of becoming farmers, and they currently live in an apartment built inside a barn on John & Stacy Burleigh’s property in Wellington. 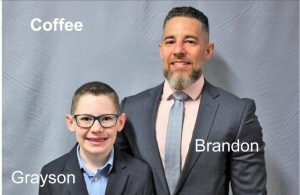 Brandon Coffee was born and raised in Pampa, TX. One of his grandfathers was a cotton and peanut farmer and the other served as an elder for 50 years at the church of Christ in Pampa. Brandon’s dad has now been an elder there 10 years. Brandon graduated from Lubbock Christian University in 2003 with a degree in biology. His parents also went to LCU, and his dad was in the same social club as Albert Brensing. Brandon knew the Brensings’ son, Russell, at LCU. After he graduated, Brandon worked in admissions for the school for a couple of years and served as the student activities coordinator. He then earned an MBA from Texas Tech. Brandon has worked in the insurance industry for 11 years, for the past two years as an underwriter for Amerisure. Brandon’s ex-wife grew up in Wichita and he moved back a year ago to be near their son, Grayson (10), who is in the 4th grade at Maize Elementary. Grayson enjoys playing the piano, singing, playing video games, reading, and science. Brandon enjoys running, lifting weights, playing tennis, golf, kayaking, and camping. He enjoys following sports (mostly Texas teams), but also likes the Kansas City Chiefs since Patrick Mahomes graduated from Texas Tech. (Go Chiefs!)