On the first day of 2014, Alex & Erin Flood moved to St. Paul, MN, with a dream of spreading the Good News in a major city with no other churches of Christ. Now, more than nine years later, they are concluding that work with plans to return to Kansas and pursue a new ministry they are praying God will lead them to.

Alex came to Christ through the influence of Northside members and met Erin when both were active participants in our college-age group. After marrying in 2010, they headed to Lubbock, where Alex graduated at the top of his class at the Sunset International Bible Institute and Erin earned a law degree at Texas Tech.

God has truly blessed the Floods’ time in St. Paul. He added four children to their physical family, and through Alex & Erin’s zealous work, six souls were added to God’s Kingdom. Others who were part of the congregation grew spiritually as a result of the Floods’ teaching and shepherding. The group that met every Sunday in the Floods’ home numbered more than 20 people at the end of 2022. Now those Christians are becoming active members of other churches in the Twin Cities area.

During their time in St. Paul, the Floods were able to help many of their church members deal with addictions, mental health issues, financial hardships, and other challenges. Alex noted that as time passed, they realized their work was becoming one of pastoral care as much as evangelism. He feels these experiences have trained them well for future ministry.

Floods at Northside in Two Weeks! 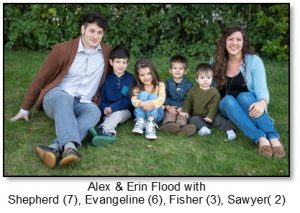 On February 5, the Flood family will be at Northside to start their final furlough with their supporters. Three other churches in this area also support them, so they will be spending time with each church during the month of February. During morning worship on the 5th, Alex will preach and give us a final report of  their mission work. After worship that evening, everyone is invited to join together in a potluck meal to celebrate the Floods and thank them for almost a decade of mission work.

Small groups, please cancel your meetings for that evening and join us for this celebration. Everyone, please bring your favorite potluck food and some cash for the money tree we’ll give the Floods that night to show them our love and appreciation.

Thank you, Floods, for your hard work in St. Paul, serving as ambassadors for Christ and representatives of the Northside church! And many thanks to Paul Herrington for serving as the Floods’ liaison on the Missions Oversight Team for the past nine years. He and Stacey have been great supporters of Alex & Erin!