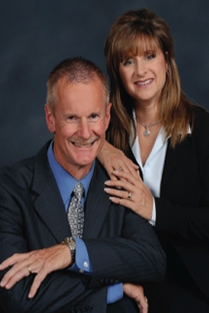 Clayton was born in Houston, TX, and moved several times before his family moved to Wichita in December of 1971. After graduating from Goddard High School in 1977 he attended Texas Tech in Lubbock for two years before returning to Wichita to start working in the family business, Wichita Tractor Co., in May of 1979. In December of 1980 he met Tami through a mutual friend. Clayton was baptized July 1, 1981. Clayton & Tami were married in April of 1982 by Charles Bishop in the Bartlett Arboretum in Belle Plaine.

Clayton and Tami came to Northside in the fall of 1997. Prior to that they had divided their time between Westlink and Belle Plaine churches of Christ. Clayton helped with small accounts payable for several years before becoming deacon over facilities in 2004. He also teaches and is involved with the Men in Black that support the WWW/God Conference. He became an elder in May, 2012.

Tami was born in Wichita, KS, where she lived a short time before her family moved to Seattle. She then moved to Elgin, IL, where she graduated from high school. After high school she moved to England to spend a year with her family due to her dad’s transfer with Boeing. She returned to Wichita in 1980.

Tami has taught cradle roll since 2000, has worked with Wednesday night meals, and has been involved with the WWW/God conference since its start in 2007. She is a homemaker and enjoys doing activities with her family. Tami also loves to scrapbook, which ties in well with Clayton’s love of photography. They both love to travel.

They have two daughters: Melissa and her husband Craig Dossey and children, Brooklynn, Cydnee, Caleb, and Landon; and Lindsay and her husband Kelby Kingsley and daughter, McKenzie. All are members of Northside.