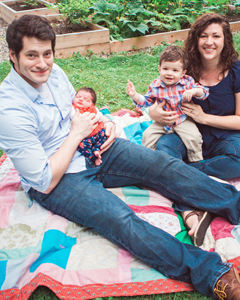 Alex grew up in Wichita, KS, and became a Christian at age 17. After high school he moved to Saint Paul and obtained a degree in audio production. After completing his degree program, however, Alex decided that a career in the music industry would not be where he could serve God best. After moving back to Wichita he received encouragement to attend the Sunset International Bible Institute in Lubbock, TX.

Erin grew up in Newton, KS, and graduated from Harding University. After that Erin took a year off from school and worked for Harding in London. While there, Erin learned how much she enjoyed living in a big city, meeting new people, and experiencing different cultures. After teaching in London, Erin moved back to Kansas, and in 2010 she and Alex were married.

Right after the wedding Alex and Erin moved to Lubbock where Alex completed a bachelor of biblical studies degree and some graduate work and Erin earned a law degree at Texas Tech University.

Because of his time in the Twin Cities, Alex earnestly desired to spread God’s Word in that part of America, so Alex and Erin completed mission school at Sunset in December 2013. A few days later they moved to Saint Paul and began work to plant a new church there.

Erin has begun her legal career in Minnesota and is actively involved with the church plant. She is excited for the opportunity to live in a cultured city and help win more souls for God.

The Floods launched their new congregation in November 2014. Please pray for them as they spread the gospel.