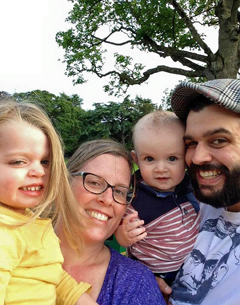 Robin & Chrissy graduated from Sunset International Bible Institute in 2010. While there they recruited other SIBI students to join them to form a team focused on planting churches in the Central Belt of Scotland. The team moved to Falkirk, Scotland, later that year and are using a number of different outreach methods to spread the Gospel. Among those methods are coffee shop Bible studies, monthly community outreach events, Youth Club in local schools, and FriendSpeak. The newly-planted Falkirk Church of Christ holds Sunday morning and evening worship services in a rented community hall.

Robin & Chrissy were blessed in February 2013 with the birth of their first child, Millie Grace. They are expecting a second child in January 2015.