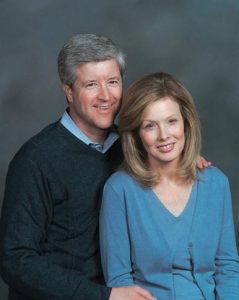 Brent grew up on a farm west of Dodge City, Kansas and attended the Dodge City Church of Christ. He graduated in 1979 from Abilene Christian University in Abilene, Texas with a degree in Agronomy and additional studies in accounting. Brent has worked in banking in the Wichita area his entire career. He is currently Wichita Market President for Kanza Bank. Brent and Debbie met in college and were married March 16, 1979. Debbie grew up in Portland, Texas (Corpus Christi area). She received her degree in Speech Language Pathology from ACU, and her Masters degree in Speech Pathology from Wichita State University in 1980.

Brent and Debbie came to Northside in 1983 when they moved to Wichita from Augusta, KS. Brent and Debbie have taught classes, led small group Bible studies, and sing with Northside Singers. Brent has led worship and served as deacon of worship. Debbie has served on the management team of Women Walking with God and continues to serve on committees for the women’s conference.

Brent and Debbie have two sons. Brendan and his wife, Whitney live in Washington, DC and Ryan and his wife Ali live in Malibu, California.