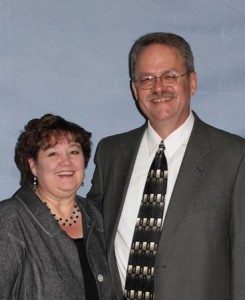 Doug and Karen were born and raised in Kansas City, KS, attending junior high and senior high together, and started dating in 1976. They were married in 1980 and have two grown children. Adam and his wife live in Wichita, and the four grandchildren provide Doug and Karen with many hours of fun! Becca and her husband and two grandchildren live in Austin, TX.

Doug was raised in the church in Kansas City. Karen was raised in the Methodist church and was baptized into Christ in 1978. They moved to Wichita to attend WSU, and Doug graduated with a business degree in 1981. He earned his master’s degree from WSU in 1995. Doug has worked in various companies and industries as a human resources manager, from Bartlesville, OK, to St. Paul, MN, and then back to Wichita in 1991. He taught night classes at WSU for 25 years before retiring in August 2021. Doug enjoys reading, KU basketball, and camping in the Boundary Waters in northern Minnesota.

Karen is a piano instructor and has taught many Northside children and adults since they came to Northside in 1991. She served as the Executive Director of the Bel Canto Youth Chorale, served on the Board of Directors for the Master Arts Chorale, and has worked as a professional accompanist. One of Karen’s ministries is the Northside Singers. She co-directs the group and provides many original arrangements of songs to be performed at weddings and funerals. Karen has taught ladies’ classes, children’s classes, coordinated mother/daughter banquets, and was the program director for the Women Walking with God conference for its first five years. She enjoys music, reading, and traveling throughout the U.S. and Europe.

Doug has taught many adult Bible classes over the years and coordinated Northside’s children’s education for a period in the 1990s. He became the deacon over Member Care and Community Benevolence in 2004, and with Karen’s help has served many members at Northside in that capacity. Since October 2010, Doug and Karen have become involved in the Celebrate Recovery ministry, and currently lead small groups in the Step Study part of that program. In May 2012, Doug was appointed to serve as one of Northside’s shepherds, and in September 2021, Doug accepted the additional responsibility of serving as the Adult Education Coordinator at Northside.