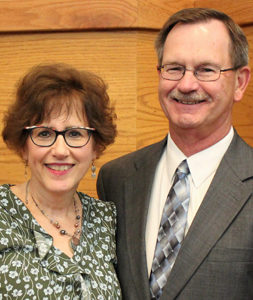 Originally from Lebanon, TN, Jim’s family lived in several states before settling in Memphis, TN, where he grew up. Freida was born and raised in Tullahoma, TN. They met while in college at the University of Tennessee in Knoxville and were married in 1978. Together they lived in CT, TN, and GA before moving to KS in 1985.

Freida has a BSW from Southwestern College and a master’s degree in social work from the University of Kansas. She is a licensed clinical social worker and has worked in various settings as a social worker for 28 years. She retired in 2020 after 12 years working for Wichita Public Schools. She enjoys reading and spending time with their grandchildren.

Jim and Freida came to Northside in 2007. He served as a deacon working with the adult class fellowship groups starting in 2012 and became an elder in 2019. He has worked with the sound/audio booth and is a member of the Northside Singers. Freida has served on the management team of Women Walking with God, works with the Titus 2 ministry, and helps as a Guide in the Safari wing.