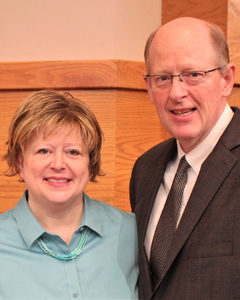 Brent Clothier was born in 1966 in Emporia. He was raised in the Hutchinson area and graduated from Pittsburg State University in 1990 with a degree in plastics engineering technology.

Laurel is a stay-at-home mom with an elementary education degree from Kansas State University. She has taught kindergarten, second, and third grade. Laurel and Brent met while they were students at Fairfield High School in Langdon and were married on December 16, 1989.

Brent has been with Textron Aviation since 1998 and currently holds the title of Sr. Specialist of Materials and Process Engineering. Brent completed a master’s degree in business administration at Newman University while working at Textron.

Brent enjoys hunting morel mushrooms and pheasants (but not at the same time). He likes listening to audio books, exercising at the Northwest YMCA, and working on projects at Laurel’s family farm in Penalosa. He also counts attending his Prayer Pal’s activities as one of his hobbies. (Brennan Douglas is his Prayer Pal, and Brent says he’s a fine young man!)

Since coming to Northside in 2002, Brent has served in several capacities, including being the coordinator for worship assignments and teaching both youth and adult classes. He also served as the deacon for men’s ministries and special events. Brent has been an Elder since 2019. Brent and Laurel have served on the Youth Group Parent Team, and they are currently the leaders for the ALIVE class. It is Brent’s prayer that Northside will always be a place where God’s truth is never compromised, and we are known as a people who love one another.