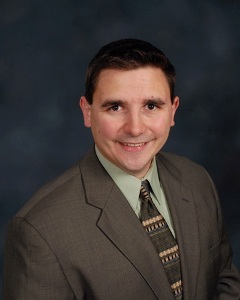 Toby is the preaching minister at Northside.

He and his wife Christy were both born and raised in the Wichita area. They met while growing up in the youth group together at the Emporia Avenue congregation. They married there on August 21, 1999. They have one son, Tyler, and a daughter, Grace.

Toby graduated from Oklahoma Christian in 1999. Before coming to Northside, he was the youth minister at congregations in El Reno, Oklahoma, and Phoenix, Arizona.

He came to Northside in 2001 to serve as the youth minister. During those 14 years, he lead a family-based youth ministry with a rotating parent team as the central pillars to all activities and events. In addition, he began and led youth group mission trips to South Dakota, Iowa, Oklahoma & Minnesota. In 2008, he revived Wichita Workcamp. Over the years, God has grown that effort to the largest Church of Christ camp in Kansas with regular attendance of 200-250 students. In 2015, he began transitioning with Steve Tandy to be Northside’s full time preaching minister.

Toby enjoys rock climbing, adventure skiing, bungee jumping, cliff-diving and, in the case of the first four, exaggerating his website biography. More commonly, after he wakes up from his nap, you’ll usually find him reading a good book, watching Netflix, going on a date with his sweet wife Christy, or playing with Tyler or Grace. Christy is a full-time mom and homemaker. When she isn’t fulfilling those roles, she is usually serving others or working on her homemade jewelry ministry.