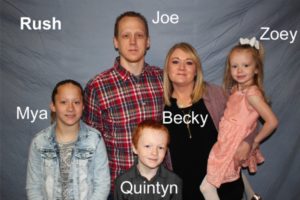 Joe & Becky Rush have known each other since she was in preschool. Joe was born in Winfield and raised in Douglass. Becky was born in Lubbock when her dad was attending the Sunset International Bible Institute and she was raised mostly in Douglass. They both graduated from Douglass High School. Joe played basketball at Cowley County Community College for a year and at Friends for a year. He then earned an associate’s degree from Butler in 2008. Becky’s father, Keith Cross, preached for 27 years for churches in Winfield, Douglass, and Augusta. When he got cancer, Joe & Becky moved to her parents’ country home in Udall to help care for him, and he passed away last October. In high school, Becky played basketball and competed in rodeos (barrel racing and poles). The family still has several horses on their 10-acre property. Becky is the youngest of five siblings, and all of them attended Lubbock Christian University. Joe and Becky were married in 2007. Joe has worked at Spirit Aerosystems since 2007 as an assembly mechanic on G650 engines for private jets. Becky has also worked at Spirit for the past six years as a composite mechanic. Joe enjoys sports and other outdoor activities and Becky likes singing and still enjoys riding horses. The Rushes have three children. Mya (10) will be in fifth grade at Rose Hill Intermediate School. She likes to play basketball, softball, and soccer and ride the family’s horses. Mya recently took a tumble off of a rough terrain vehicle and is recovering from a skull fracture. Quintyn (7) will be in third grade at Rose Hill Primary. He likes games, computers, history, and football. Zoey (4) will be in pre-K and likes cowgirl things and riding the family tractor. 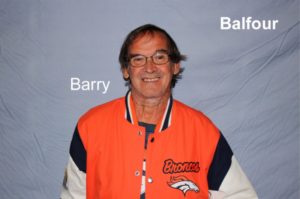 Barry Balfour was baptized at Northside on April 21. He was born in Enid, OK, and raised in El Dorado and Wichita. Barry graduated from East High School in 1970. He has worked for a number of different restaurants in Wichita, including Denny’s for almost five years. He did telephone sales for the Wichita Eagle for a while and worked as a custodian for Meridian Avenue Baptist Church. When he was younger, Barry used to enjoy riding a 21-speed mountain bike and vacationing in Colorado. He is a big fan of the Denver Broncos and the Colorado Rockies. Barry came to Northside because of his friendship with Scott Decker and Shauna Brankel. 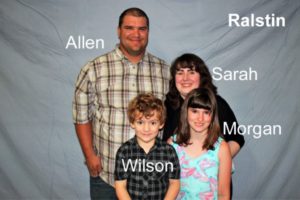 Allen & Sarah Ralstin became Northside members on June 2. Allen was born in Omaha and raised in Mulvane. He went to Heights his senior year to play soccer and graduated from there in 1998. Sarah was born and raised in Wichita and graduated from East in 1999. She earned an associate’s degree in business administration from Butler in 2002, and they were married the same year. Allen worked for the City of Mulvane doing park maintenance for 10 years and then KDOT doing highway maintenance for 10 years. On June 17 he will start with the City of Goddard Public Works Department. Allen plays and referees indoor soccer at Wichita Sports Zone. Sarah has done clerical work for more than 20 years, and currently works as an insurance biller for Kansas Joint & Spine Specialists. She enjoys baking cookies, and for the past two years has made and donated large quantities of cookies for Botanica’s annual Illuminations. The Ralstins have two children. Morgan (10) is in 5th grade at McClain Magnet Elementary. She likes to read, draw, do crafts, and play the ukulele. Wilson (5) will be in kindergarten at McClain. He likes playing with Legos, riding his bike, and playing outside with Nerf guns.